Consider this post the official preface to our camping trip (if only time travel were really possible)...

Working on Fat Penny (she doesn't have a waistline so her name has been amended) is a bit of a hassle at the moment as we currently don't have room in the garage to work on her. Our weekends since we picked her up have consisted of gathering the parts we have accumulated during the week and driving her over to my dads house where Fat Penny can be properly attended to. In addition to this being a pain, we were making the trip illegally. Wyoming state statues clearly state that the bus must have at a minimum working headlights, brake lights, and turn signals (they also state that any vehicle whose maximum speed is 25 mph must have a slow moving vehicle sticker... Fat Penny might meet this requirement). None of those things worked and we were without wipers too.
Aside from illegally operating a motor vehicle, getting the bus to my dads was no easy task. She had to be nursed over because the previous owner thought that screws shoved in the ends of cracked vacuum hoses was a suitable replacement for vacuum plugs. Any vacuum hoses that were lucky enough to survive uncut were too brittle to maintain vacuum. This didn't always make for easy idling at stoplights.
With a huge list of to-do's, I headed over to my dads house in hopes that it would be my last illegal trip. 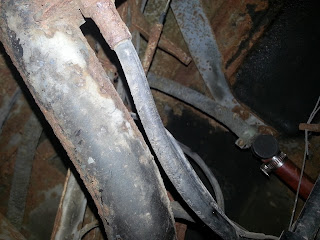 First on the agenda was to replace all the vacuum hoses plugged with screws with real vacuum plugs. This wasn't a monumental task which makes it even more confusing why someone would cut corners. I guess sometimes spending $1.59 for vacuum plugs is to much!? The biggest issue causing loss of vacuum was the line that runs from the firewall to the brake booster. It looked as though it was original and nearly turned to dust in my hands. The ends of the hose were frozen to the metal lines but with a carpenters knife and some four-letter words, they came right off.
With all the vacuum hoses replaced it was time to turn my attention to the rats nest wiring. The brake lights and turn signals were an easy fix. There were missing and burned out bulbs to be replaced and a ground wire that needed to be plugged in. 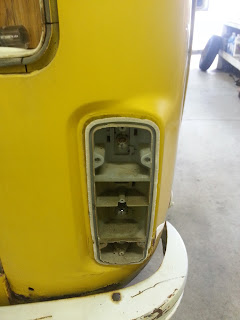 Tracking down the problem with the headlights was a bit harder. At first it appeared as though it was going to be as simple as changing some fuses. When brand new fuses didn't solve the problem I resorted to shaking the fuse box. This didn't seem to help either so, I tracked down the fuse box layout on ratwell.com and discovered that the headlight wires were not correctly plugged into the fuse box. Problem solved.

Last on the list was the wipers. We had been caught in a rain storm the week before while driving the bus and we had to pull over and wait for the rain to stop. Luckily for us Penny is a camper and we could wait out the storm in relative comfort. Unlucky for us, Penny is a bit disgusting on the inside and we relaxed in filth. OK, back on track now. The wiper motor wouldn't even turn on so I began the process of tracking down the power supply. I didn't even have to climb under the dash thanks to the gaping hole where the stereo is supposed to go (makes for a decent cup holder). The power supply had been unplugged. There are only two reasons I can come up with for why this was the case. 1) the previous owner/s were not that bright (see: plugging vacuum hoses with screws), or 2) there was an undiagnosed wiring problem and by plugging in and turning on the wipers I was going to start a fire. With my fingers crossed that the previous owners were knuckle-draggers, I plugged in the power to the wiper and hit the switch. No fire!

I had a little bit of time left in the day so I decided to take care of one issue that has been bugging me since we got the bus. That issue?...the spare tire on the nose of the bus! WHY!? Yes, I get that its a camper but that doesn't mean it has to look like one. That spare tire completely ruins the lines of the toaster...eh, I mean bus. It consumes valuable real estate that is better suited for the VW logo. It also wreaks havoc on the nose sheet metal. For all those reasons, I cut the mount off and the spare will be moving back to where it belongs. 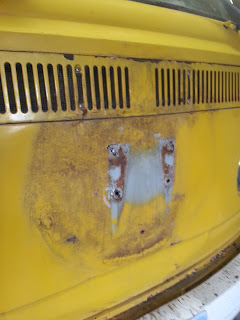 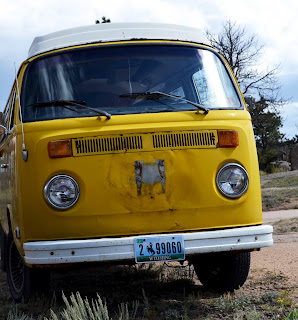 It doesn't take much time to do things the right way. I guess luckily for us the previous owners didn't realize what they had in Fat Penny otherwise we would have never found her. We have been extremely lucky thus far that the problems with our bus are the result of operator error and not fatal flaws, and for that we are thankful.
Share Tweet Pin