It was day three of our trip and boy, it was an early one.  We zombie ate some breakfast (although I was pretty enthralled with the automatic pancake maker at our hotel) and sleepily stumbled out into the cold, morning Montana air.  We loaded our bags into the backseat and proceeded to get comfy for the ride to come. Just as I had buckled my seat belt and wrapped the trusty blanket around me Jason attempted to turn over the motor, but to our chagrin with no avail.  Oh hello, day three... 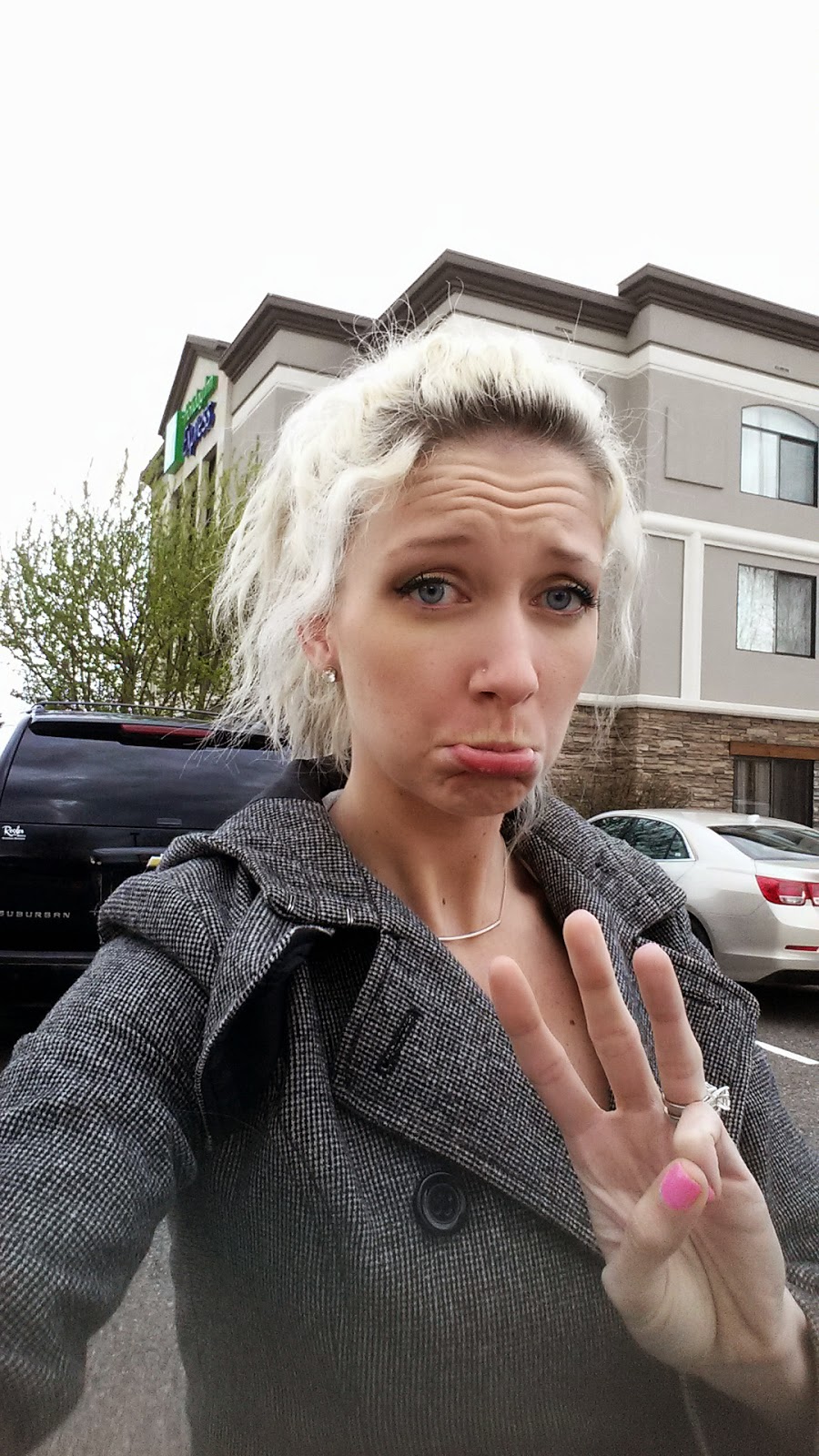 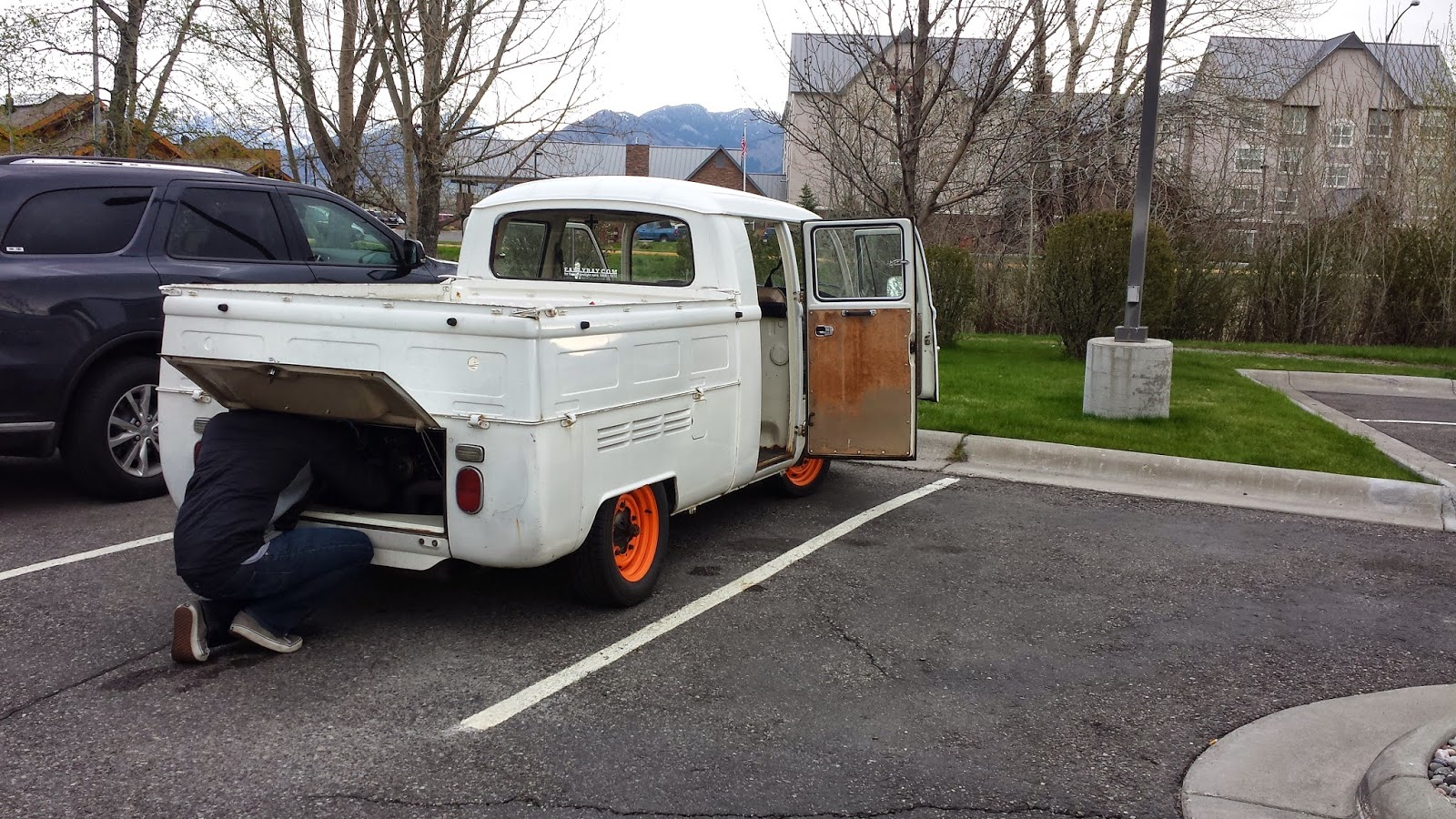 He fiddled with some things but could not get the engine to fire, so a call to his dad was in order.  After we got a laundry list of things to check Jason set out to find what was wrong, process of elimination style.  I was a bit skeptical, so I retreated inside to see when the nearest Carquest opened and where we could acquire a uHaul.  It was too early for optimism.

I went back outside to help Jason turn on the engine when he needed me to (I have total mechanic skills, I know) and about 20 minutes into me flicking the key back and forth Pedro roared to life.  Now if you know me well, you know I don't get overly excited very easy.  Oh man, I was excited.  It was a blur of happiness, but I think I recall screaming and jumping into my amazing mechanic's arms, 5 month pregnant belly and all.

In hindsight Jason claims that this little mishap brought us closer to Pedro, but I would have been happy bonding in some other way.  And for those of you who are curious, the points in the distributor had gapped too wide which kept the electricity from flowing.  And now we know. 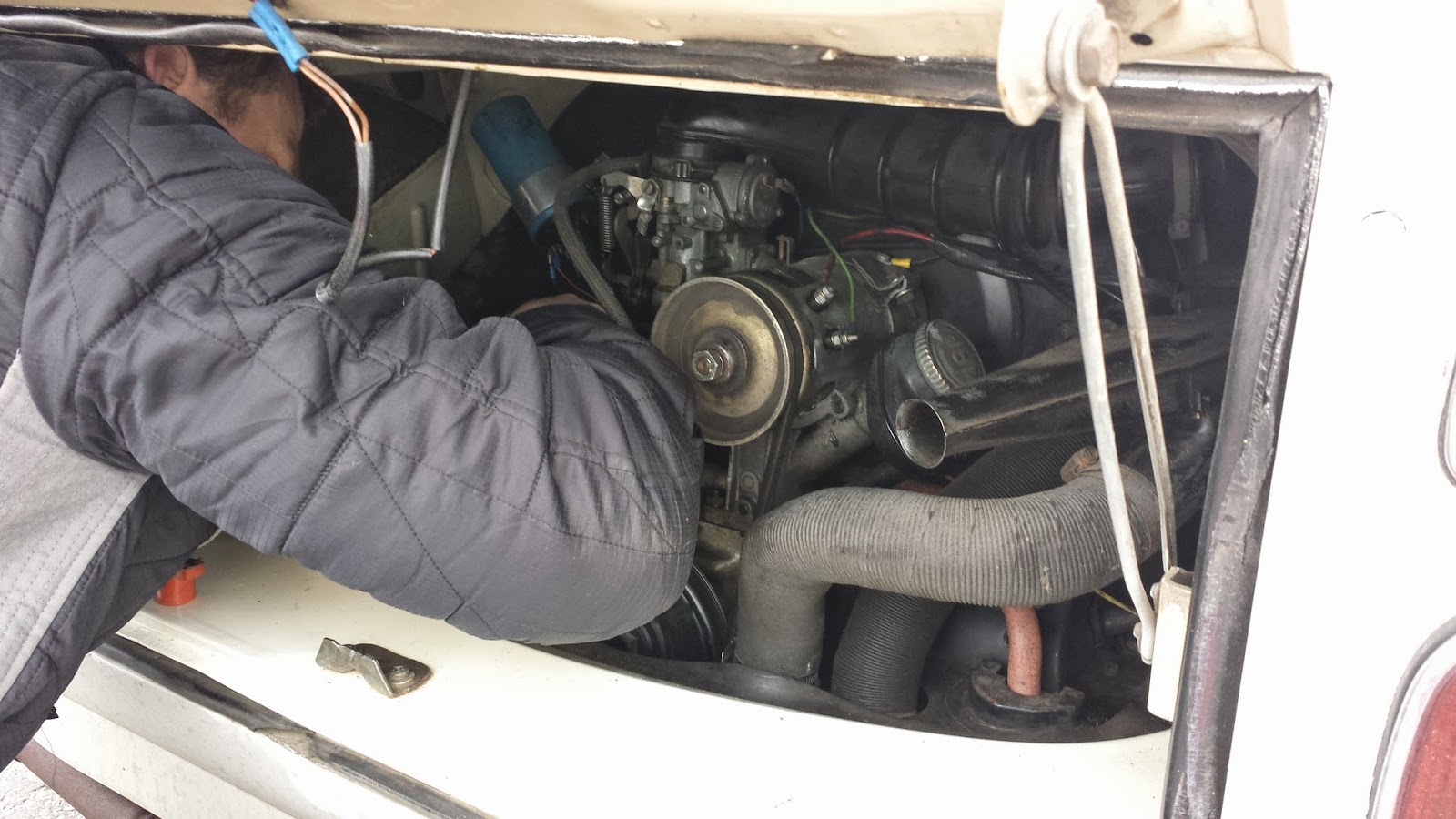 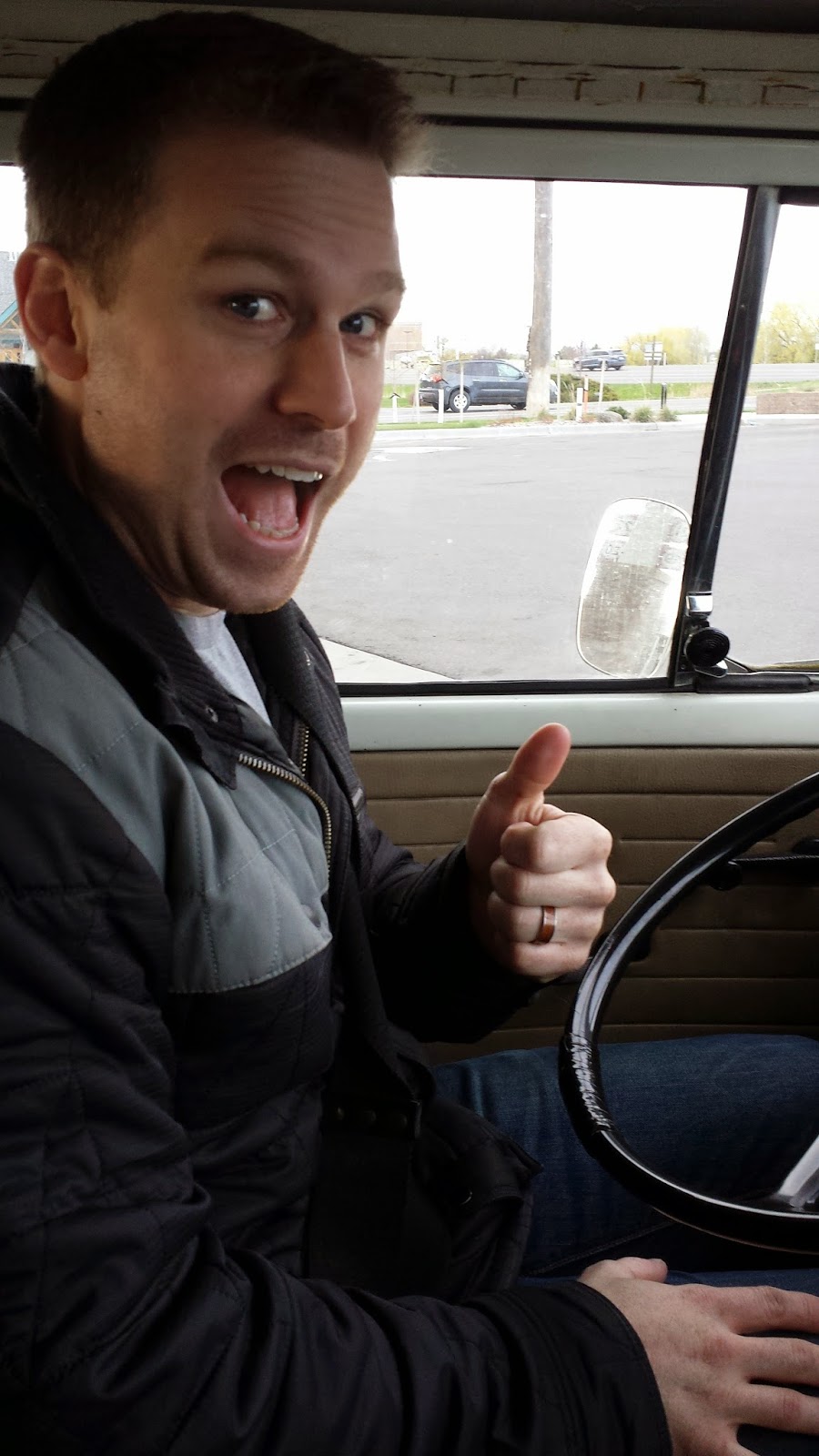 We were happily back on the road and trying to soak up the endless scenery, since Cheyenne doesn't offer much in the way of pretty.  A few hours passed and we arrived at Little Big Horn Battlefield in Crow Agency, MT.  Both of us love a bit of history, so we were excited about this stop and to make it even better we got out of the truck and the weather was gorgeous.  Not only did I get to soak some of the past, I got a bit of a tan while doing it!
I had never been to a battlefield site before, so it was interesting to learn about what led up to the battle and then read the markers that explained exactly what went on under our feet.  The graveyard at the site is pretty extensive, as servicemen from all conflicts can request to be buried there.  We saw headstones from the mid-1800s all the way through the Vietnam War.  Including that of General Custer, who was supposed to have his famous 'last stand' on that very hill.  The memorial standing for the tribesmen involved was also pretty exceptional and gave some insight into the injustices  that they had to face at the hands of the US government. 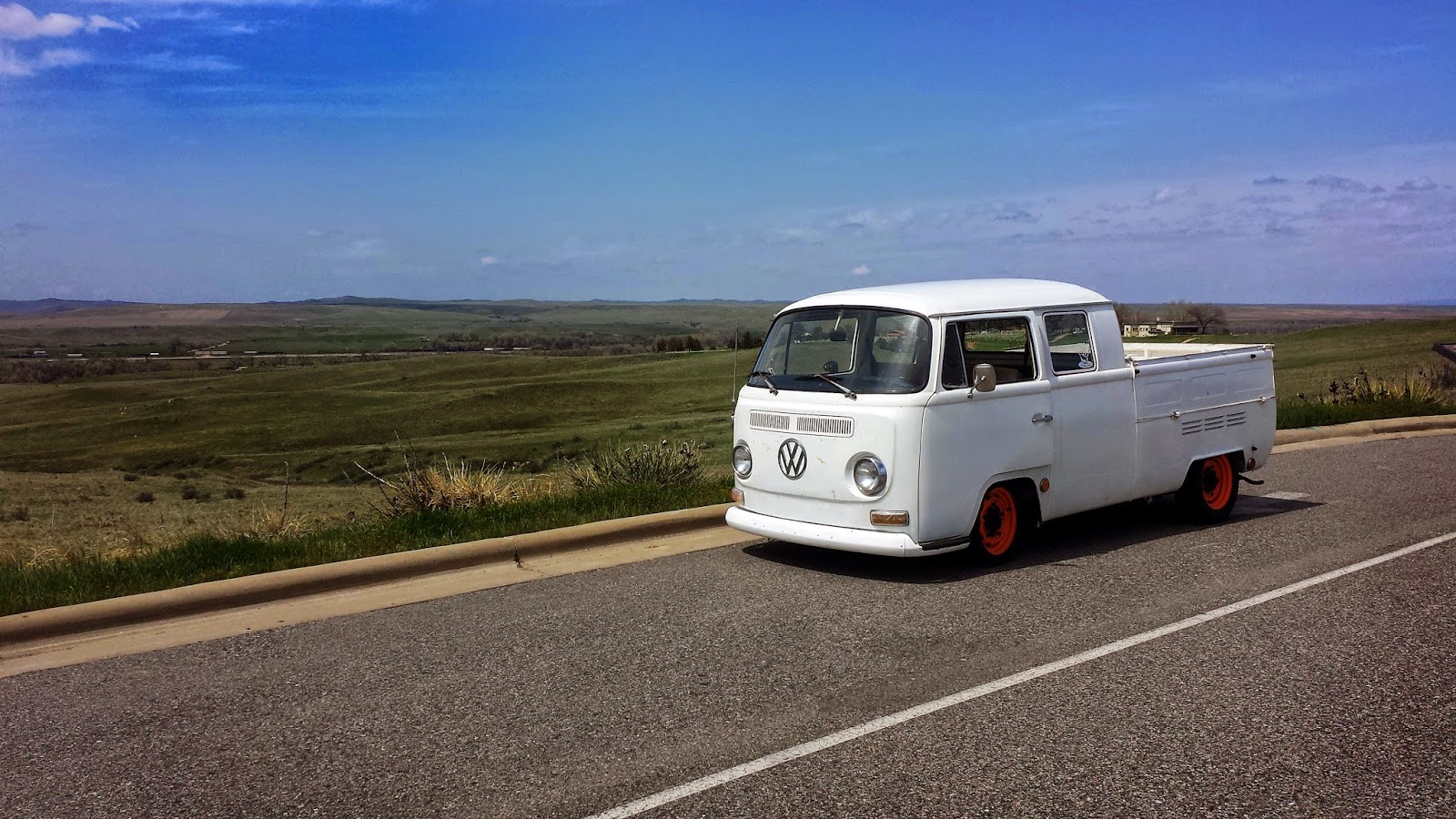 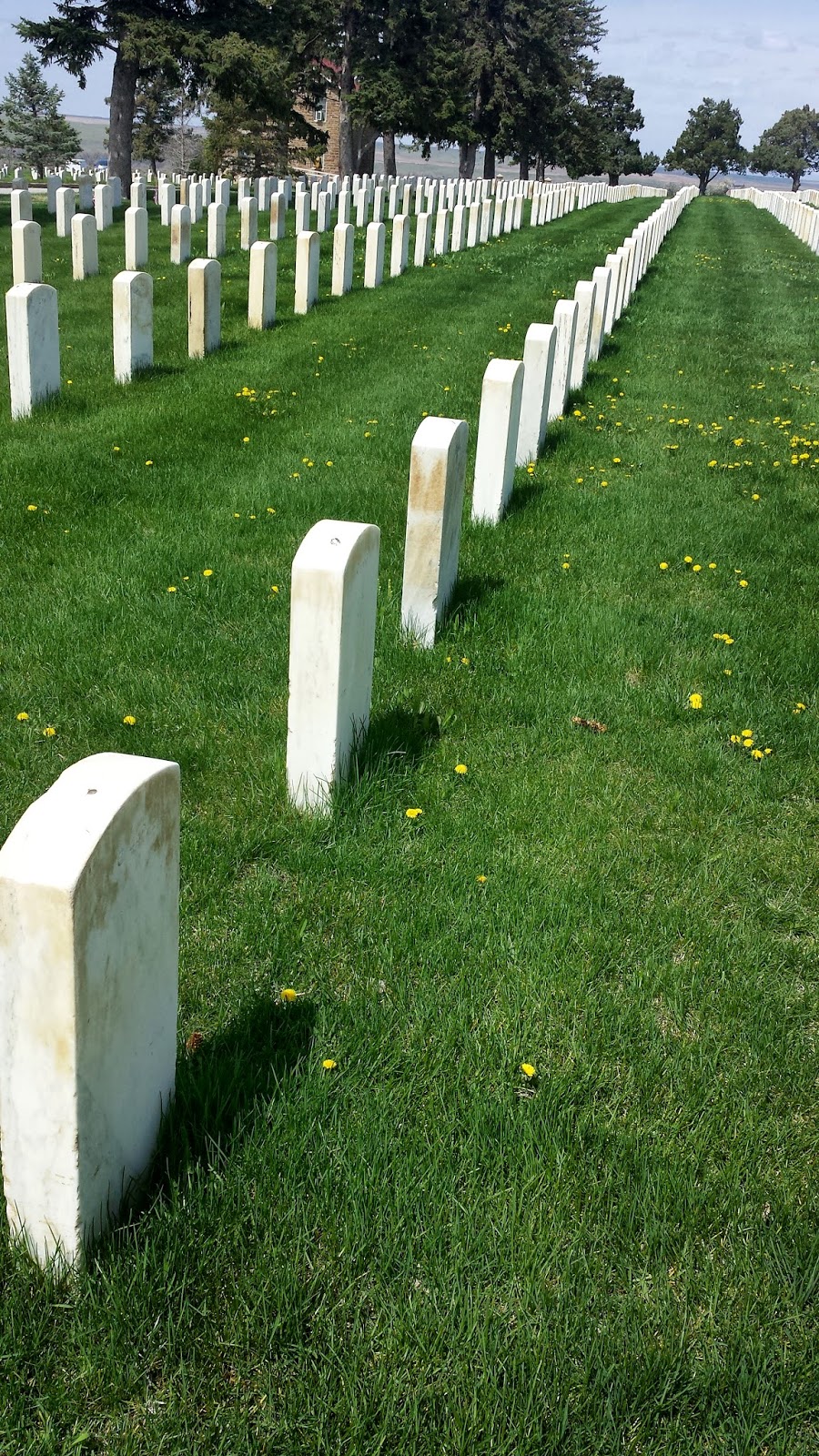 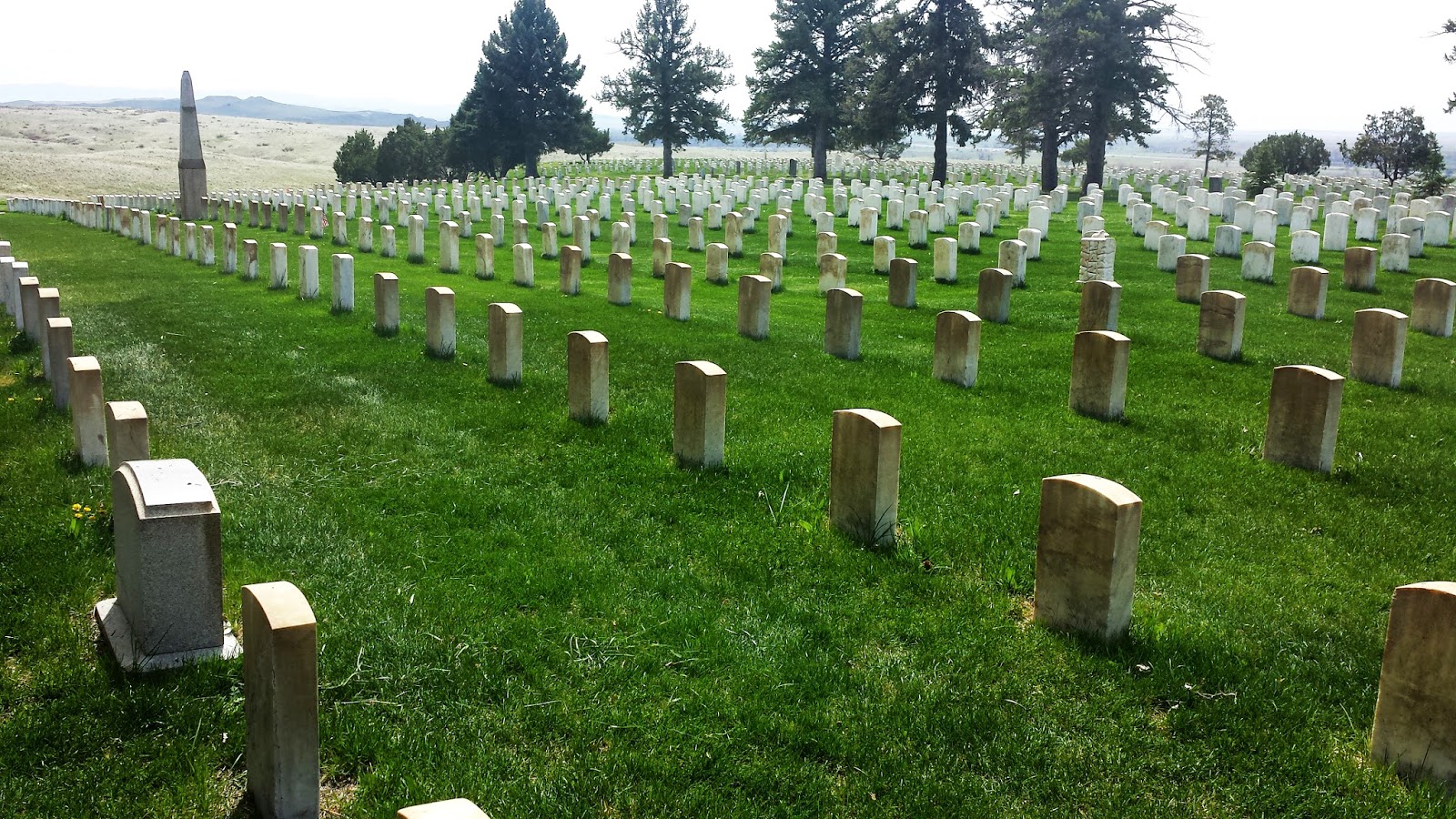 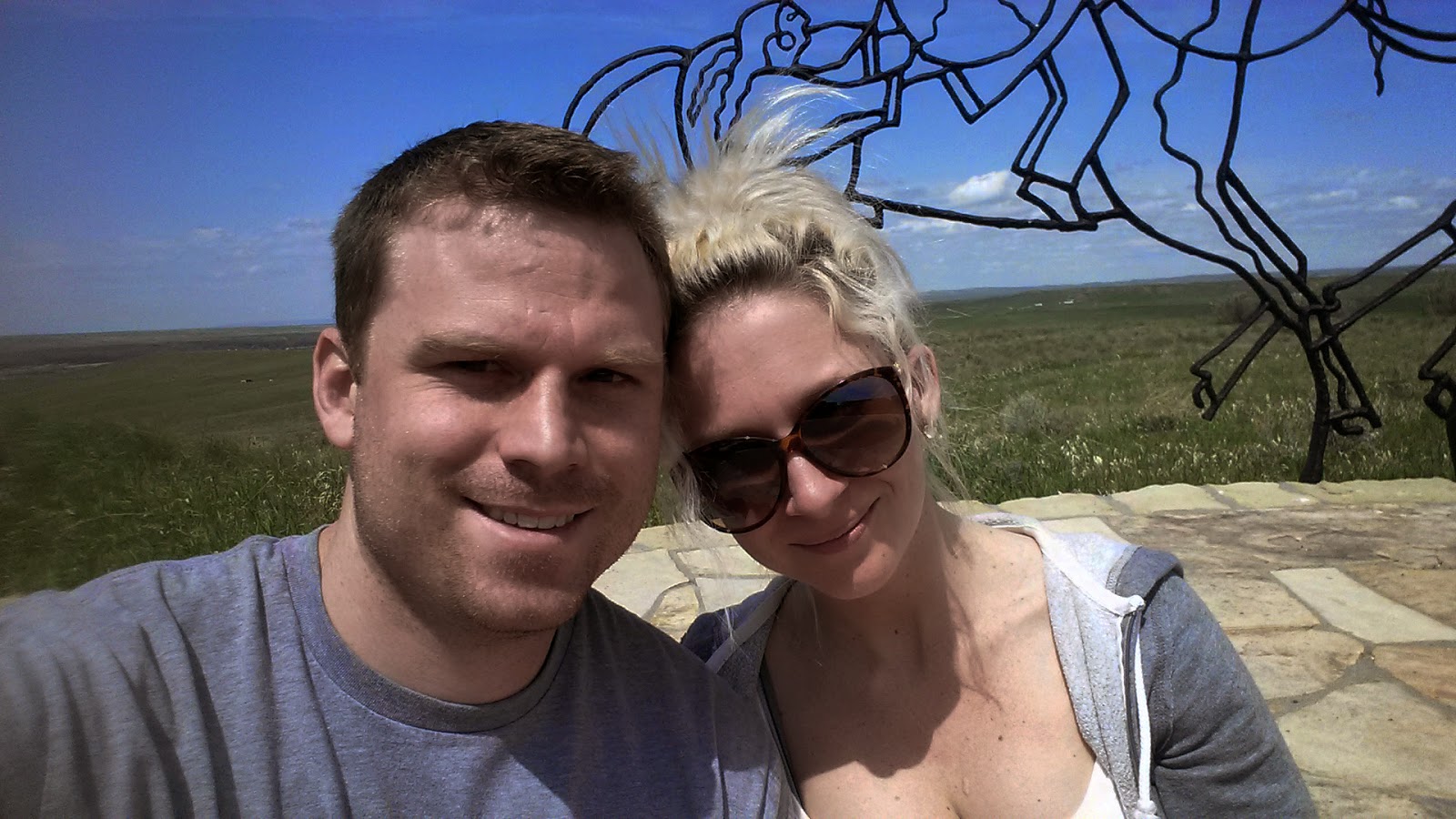 With some summertime color on our face and a bit more knowledge in our heads we were off again, this time finally on the last leg of our trip.  And because that was the case, we were pretty elated to see this bad boy about an hour down the road... 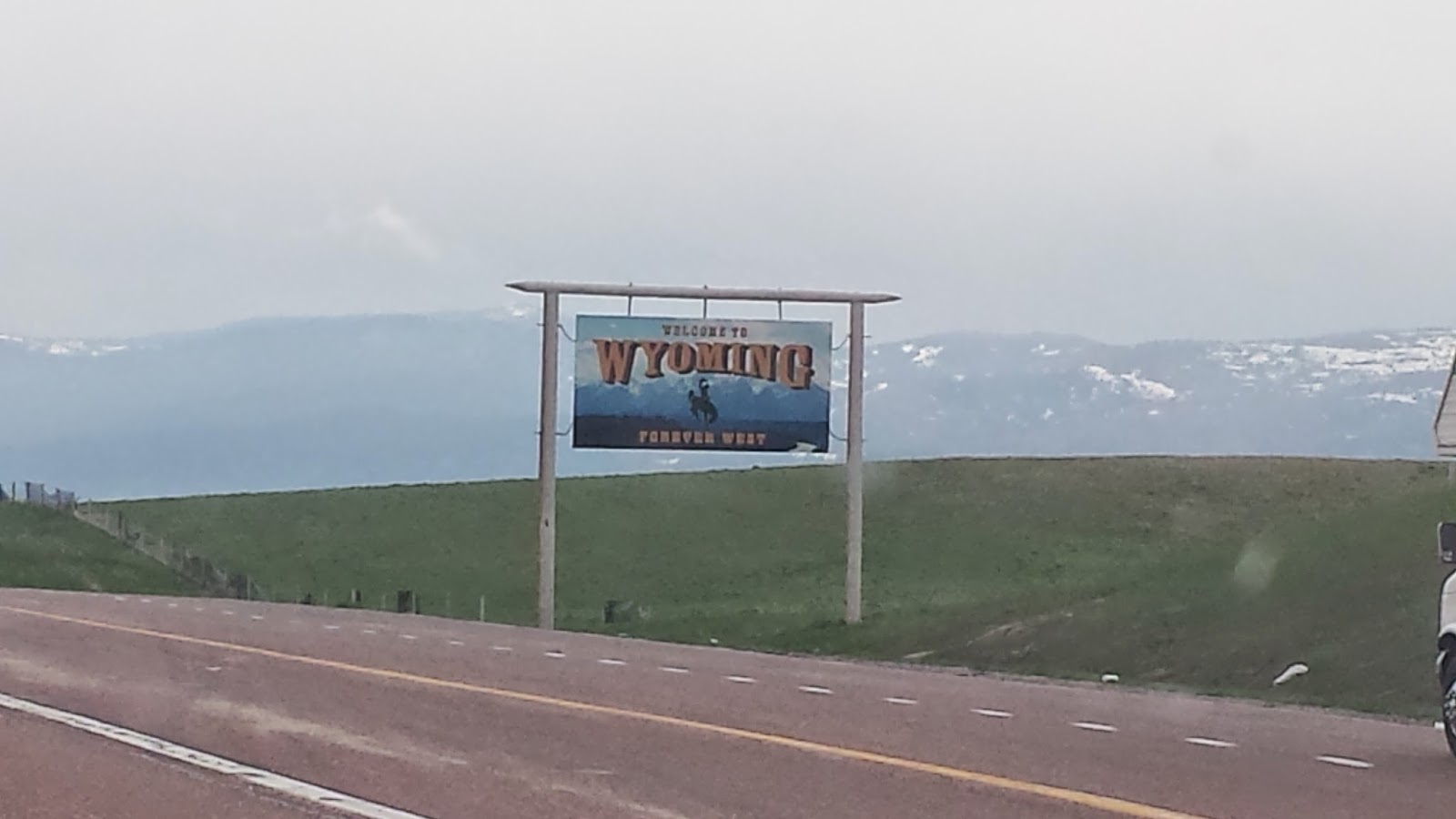 Now, of course our lovely state greeted us with a nice gust of wind and seemingly crappy weather, but since that's the norm when crossing any border of this state we had to admit we were happy to be home.
One gross (bordering on funny) experience that we did not foresee was the bug massacre that we were carrying out on our entire drive home.  Apparently driving a flat faced vehicle does not allow for the bugs to get caught up in any air stream and fly over us, the only option was splat.  This was all well and good when the bug guts splatted clear, but mid-Wyoming we hit a swarm of something different.  I had to get out and take a picture to memorialize this monstrosity, as it looked like we had gotten pelted with a carton of eggs.  I mean, we still had no tunes so this was entertainment, right?
Along with a million fly and mosquito carcasses, plus that swarm of yellow-guts bug, we also managed to ensnare two butterflies in the crack of the front vent.  I nicely asked Jason to save one outside of the Pizza Hut we stopped at, but even with all of his efforts (he took off the vent to save the little guy) I'm afraid we were just destined to be bug sadists that day. 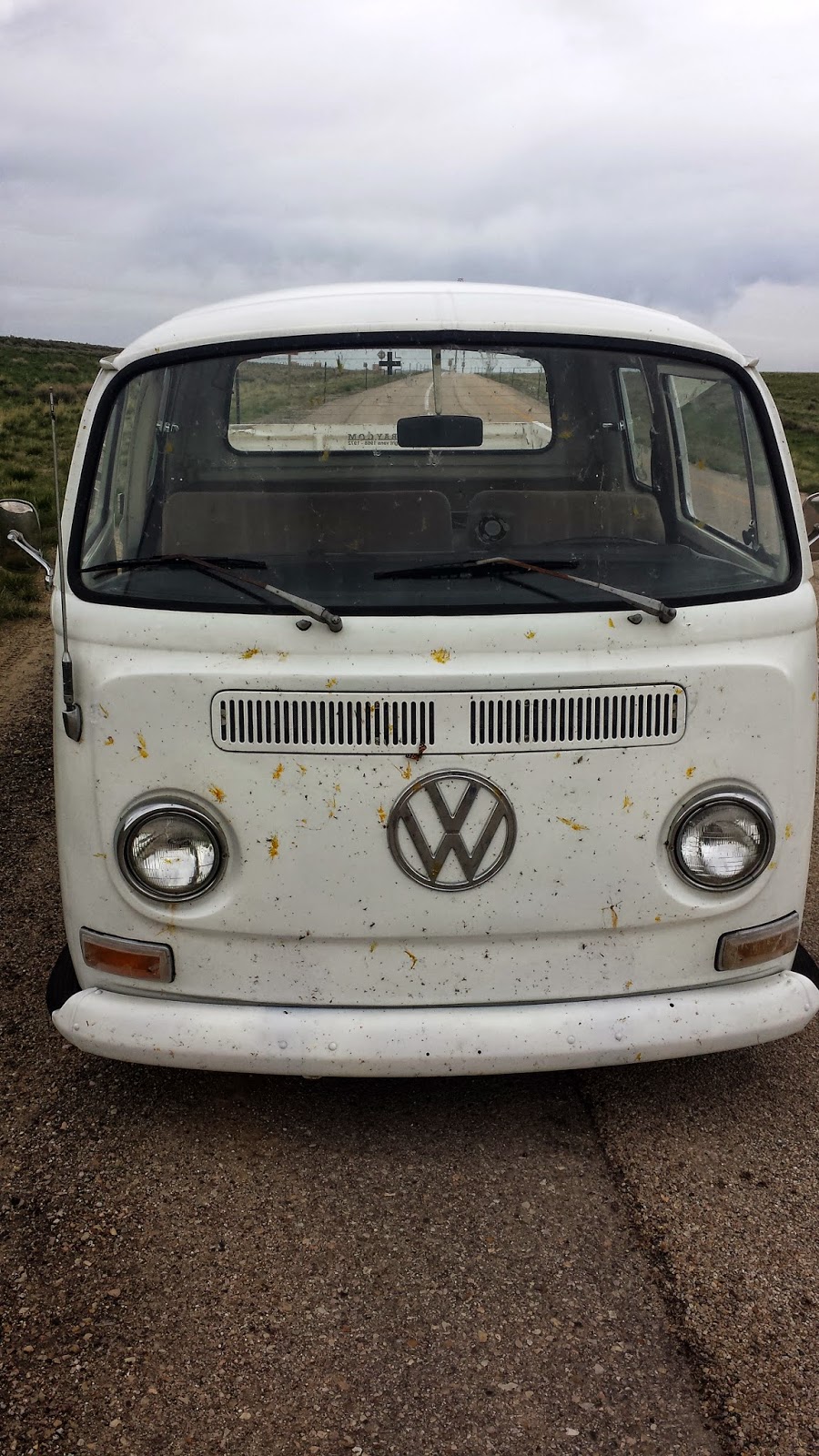 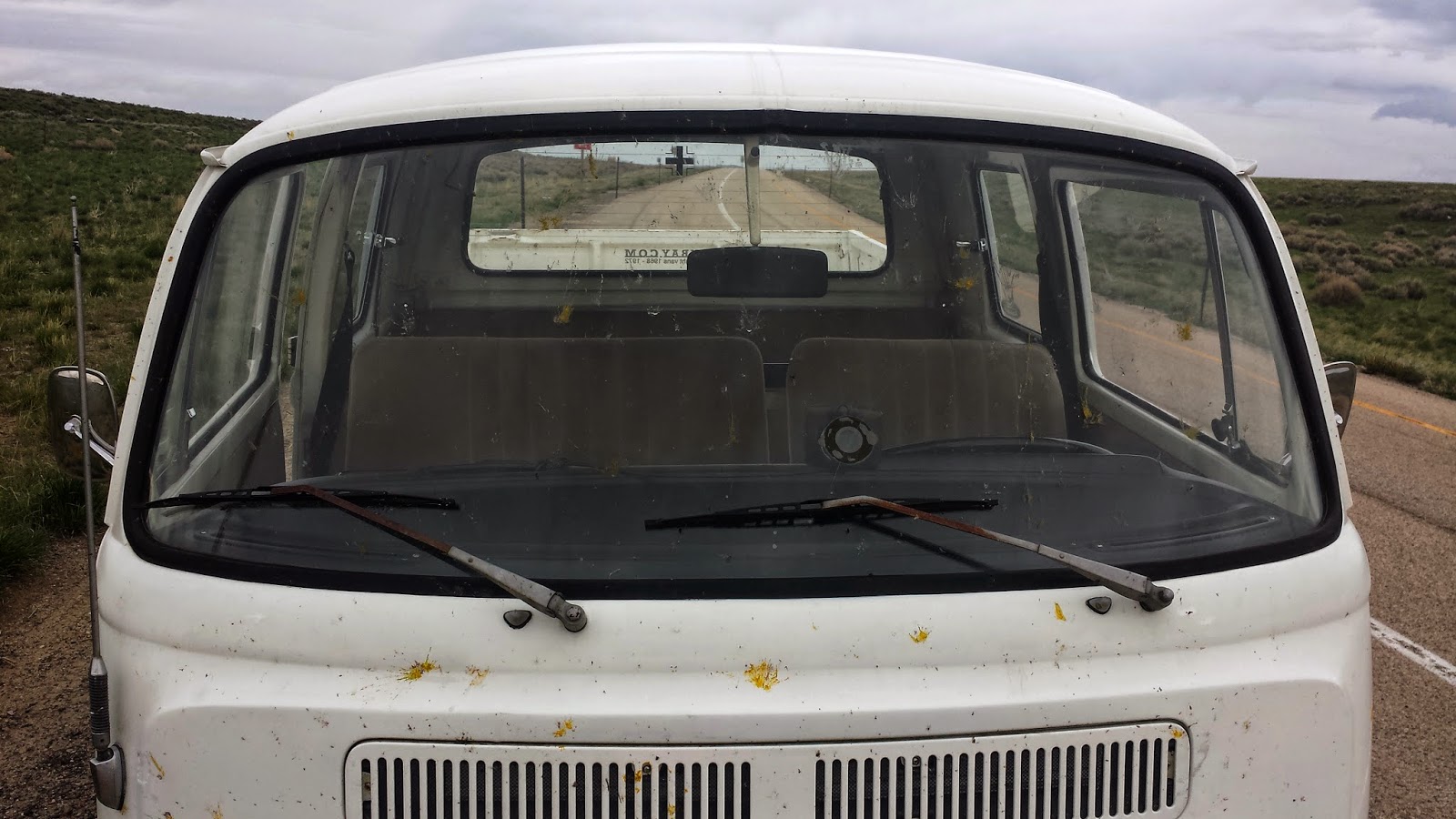 With one more fill-up in Casper and a chat with a motorcyclist who followed us and flagged us down to chat about the bus, we were almost home!  The rest of the drive was uneventful and around 9pm we pulled up to our driveway, exhausted but so happy to be home.  I must say, the outside of our house is infinitely cooler with our dual VW situation.
I'm pretty excited to see what's in store for a summer full of Penny restoration and camping, as well as attending our first VW show in a few weeks!  Quickly, a speedy thank you to the best roadtrip and life partner a girl could ask for.  How could I say no to taking our little boy on his first road trip before he was even born! And also to the 30 people who waved, honked or let us know in some other way how stellar our ride was. Yes, we kept count.  We agree, these VDubs are a pretty awesome breed. 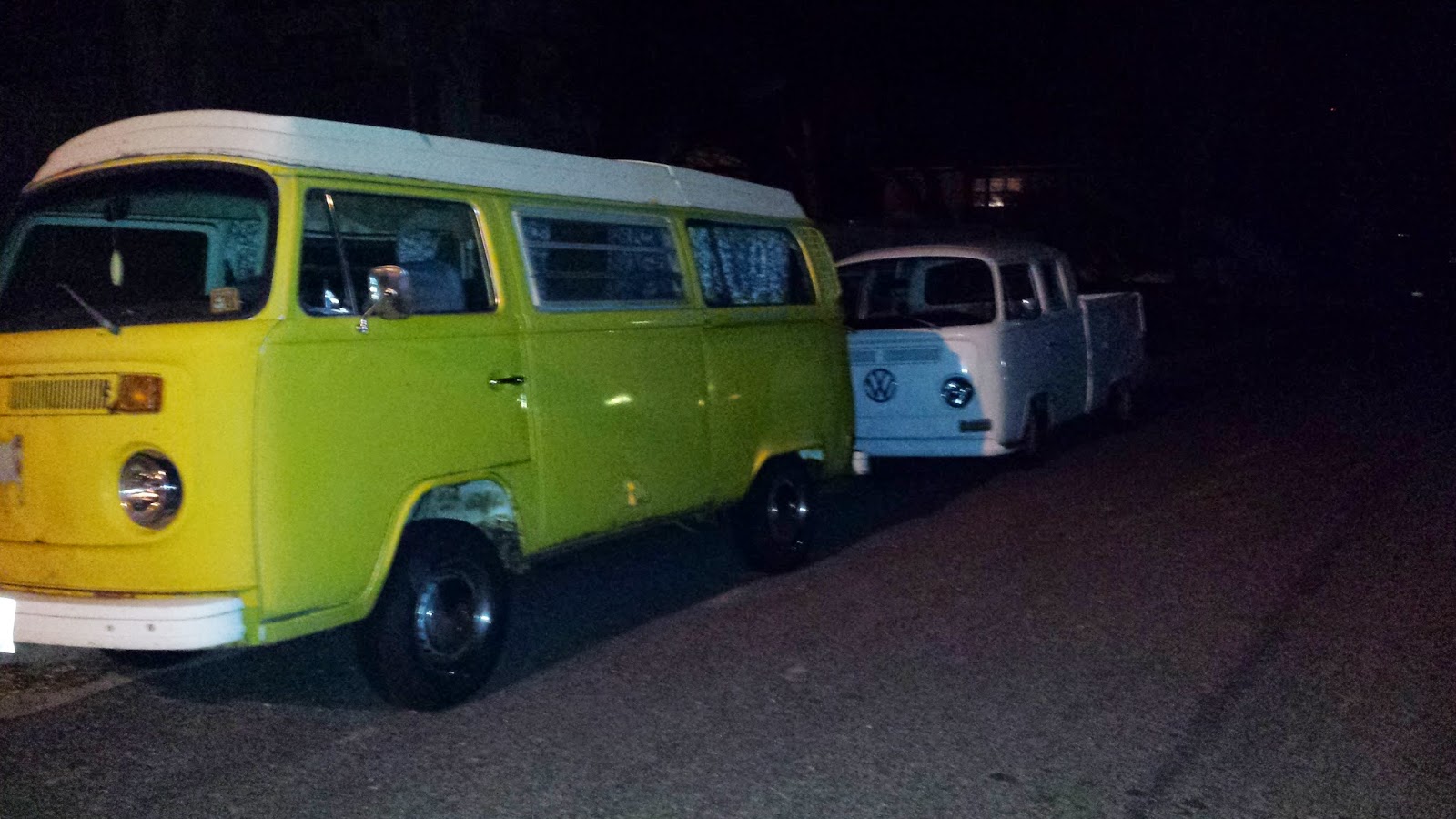