We Need to Drive it Where?

It has come time for our bus to be legal.  From the looks of things it hasn't been registered since between 1996-1999, but that's about to change.  Armed with the Utah title, bill of sale and a wad of cash we stroll into the court house on a mission.  The title clerk knocks us down a few rungs when she informs us that in order to get the title transferred to Wyoming a VIN inspection needs to be performed at the police station. This police station is inconveniently not located in front of our house and requires us to drive the bus there.  Drive?! And not just down the block, but on real roads!  This was going to be quite the feat.

The next day we arrive home on our lunch hour and cautiously get in the bus, realize that the seat belts are currently of no use and start her up.  Miraculously, between the squealing of miss-aligned front tires and the grinding of trying to find the evasive gears, we make it the mile to the downtown police station.  The officer's expression was priceless as he walked out of the station and caught a glimpse of our yellow beauty.  He remained stern and made no comment, but a look was worth a thousands in this case.  He confirmed the VIN matched the title and sent us on our way.

After a few more lines, forms and signatures at the courthouse we were officially co-owners of a shiny new 1973 VW Westfaila Campmobile.  Maybe those adjectives are a bit too flowery for our new baby, but sometimes it's a face only a mother and father can love...rust spots, squealy tires and all. 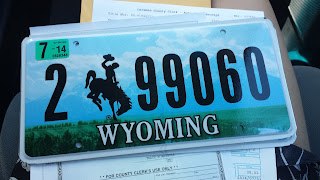 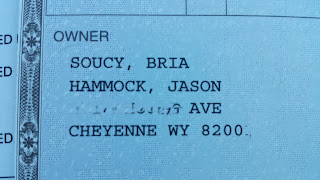