Hand-illustrated {western + volks inspired} apparel and goodies
If you have read the previous posts and looked through the pictures, it should come as no surprise to you that our VW bus was not watertight. The driver side of our bus came from the factory with a rear vent window that initially seemed like it was just jammed in a slightly open position.

After getting the bus home, closing the window and protecting the interior from further water damage was at the top of the to-do list (three plus years of sitting in a field with an open window had badly stained the wood paneling next to the fold out bed).

A check of the weather forecast revealed that we were in for a unseasonably wet week so, I headed outside armed with a screwdriver convinced that this was going to be an easy fix (oh the naivety of first time bus owners). It took a matter of peeling back the vent window's weather seal to reveal the cause of the frozen window. The entire upper part of the frame was rotten from years of leaking.

Well, I will just order a new one and we will have it fixed by the end of the week, I thought to myself. So, to BusDepot.com I went. Nothing. Ok, surely WolfsbergWest.com will have it, I reassured myself. Nothing. This continued until I exhausted the list of VW bus part websites. With hope dwindling and thoughts of what did we get ourselves into racing through my head, I checked the last place I could think of.

TheSamba.com, for any other VW newbies, is the holy grail of VW information. Here I began to find out that I was not the only one that was trouble finding a driver side rear vent window for a VW bus. In fact, the rear vent window is such a sought after item that there are several forums solely dedicated to hunting them down. Here is a summary of my research: Good luck finding one. With my tail tucked between my legs, I sulked back outside to cover the window with plastic wrap and duct tape. 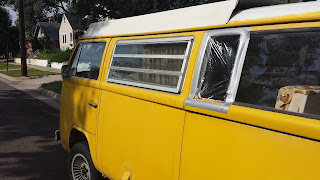 The next day, I was telling my dad (the person that taught me everything I know about cars) how I had struck out in my attempt to locate a vent window. In typical dad fashion he began to tell me a story of a time that he helped one of his buddies restore a VW bug and that they had found the hard-to-find parts in Fort Collins from a guy named Al.

Bria and I, got to Fort Collins as fast as we could.  We tracked down Al and he proceeded to tell us that he had sold all of his VW parts long ago, but pointed us in the direction of VRBA parts just down the street. The place was closed on Sundays so the search would have to wait until Monday.

Luckily, when I called on Monday, the guy that answered the phone knew exactly what I was looking for and headed into is parts yard to pull the window for me for $75. Finally, the bus would be watertight. If you are reading this because you are looking for a rear vent window for your bus, give this guy a call. You can find his number on his website www.vrbaparts.com. 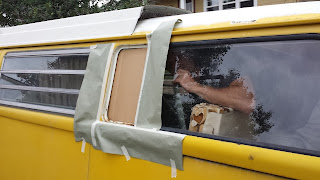 The installation is just as simple with one caveat. Apply petroleum jelly (thanks to the nice folks at theSamba.com, we now know that petroleum jelly eats rubber so use dish soap) to the weather stripping before attempting to re-install the window. 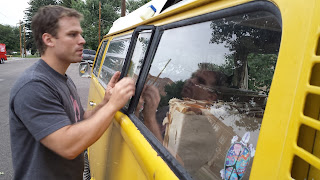 Once the window is in, simply bend the tabs back in place and voilà, you have a nice watertight window. 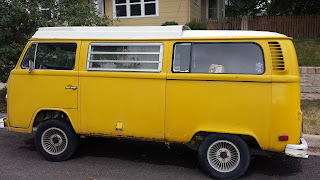 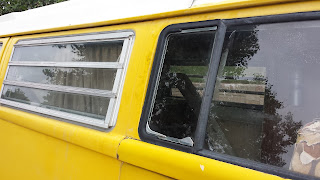