Hand-illustrated {western + volks inspired} apparel and goodies
We were packed and ready to go...apprehensive but ready.  Should we be taking Penny on a trip so soon?  (it's only 45 minutes, but still!) She had been running so smoothly around town but our faith in the 27 year old tires, aging brake lines and notoriously unreliable engine was not at an all time high.  We both must have had either a good feeling about the trip or a death wish becuase we just smiled at each other and set off on our way. 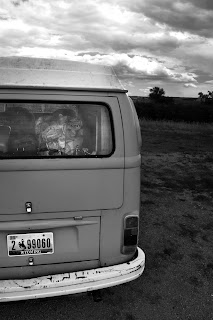 We were avoiding the interstate for safety reasons, but the highway that we had to take up into the Wyoming mountains still provided us quite a steep grade to climb before we reached our destination.  About 20 minutes into the trip everything was going well, but we decided that it would be a good idea to pull off and double check.  (We weren't nervous at all...okay, maybe a little bit.)  Jason opened the engine compartment door only to be engulfed in smoke.  Oh great.  After a bit of inspection he proclaimed that it was just old oil burning off from the outside of the motor...no biggie.  We climb back in and cross our fingers.  (Come to find out later after a beer or two that he was a bit less optimistic about the smoke as he made it seem. Apparently I'm somewhat of a pessimist who has to be calmed in situations such as that.  Hey, it worked.)

The driver may have been annoyed as I was motivating the bus up the steep hill, chugga chugga, choo choo!  The little vanny that could, but I'm pretty convinced that is what got us up that big hill.  Maybe that and the fact that Penny is pretty awesome.  Whatever the cause, we made it to the turn off safe and sound while breathing a collective sign of relief because that part was over.  Now it was time to test the tires.

The last 20 minutes of the trip was on windy dirt roads that have been made into washboards by the multitudes of summer traffic.  Needless to say it didn't make us overly comfortable to be traversing this terrain on rubber that was as old as we are.   I distracted myself with the gorgeous scenery and before I knew it we reached a spot that was perfect for us to make our camp.  We looked at each other and simultaneously proclaimed, Right on babe, Penny made it!  (a little line that we picked up from a list of 50 things you find yourself saying as a bus owner.)

We got some strange looks, a wave from a fellow Westy owner and even a 4x4 full of rednecks screaming hippie, hippie at us (we retaliated with a peace sign) but all-in-all we were pretty elated about the success of our first outing.  Never could we have imagined that a month and a half after towing her back from Salt Lake City, relatively pessimistic about the condition of the vehicle we just bought, would we be road tripping with her.  See, I know she had potential!

Click here to check out some more Penny pictures from our trip! 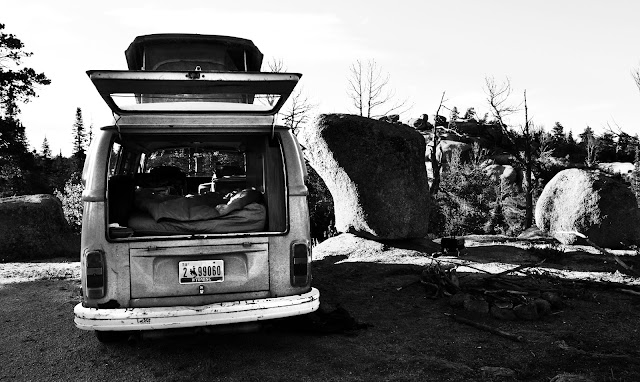