So now we have two.  I guess that can be applicable in more then one aspect of our life...since my last post we have found out that a tiny bus-loving boy will be arriving in October to bring our cute kid total to two (plus the doggies)!  Life also finds us one more Bay Window heavier these days.  I figure what is one more to make our driveway look awesome and to keep Penny company.

It all started after we got Penny and Jason officially caught the VW bug (not the like the car, like the addiction).  He proclaimed his love for the double cab version and added it to his automobile must-haves.  A few months later a beauty with orange rims popped up on theSamba.com and his drooling commenced.  Fast forward a few more months and he firmly decided to sell his 2010 Tundra so he could snap up this Seattle-based double cab.  It has a back seat for the babies?  I was sold. 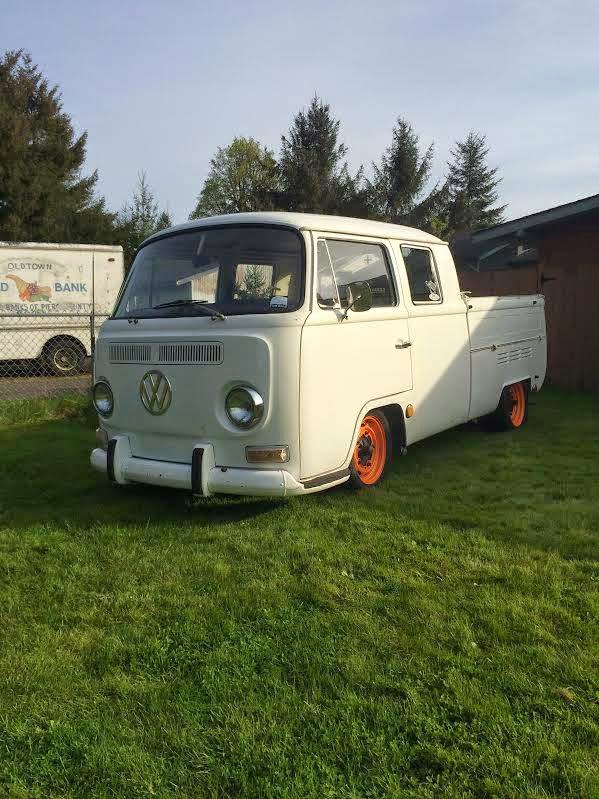 The seller was awesome about sending us a plethora of pics and videos to quell any real fears we had about purchasing a vehicle sight unseen.  While also assuring us that our new beauty had never let him down so would mostly likely be good for the long trip home.  (We were aiming for a trailer-less trip)  Within a day of the Tundra selling we put down a deposit and bought one-way tickets to Seattle.  Everyone needs a good leap of faith now and again.  Penny had potential, right?

A few weeks later and off we went.  A flight into Seattle, a rental car and a drive down to Olympia, WA later and we were proud owners of our newest baby who Jason has deemed Pedro. We assured the owners that we would take good care of him, as it was clear that they had done so for the past six years.  We gave him a test drive, handed over the check and we were off! 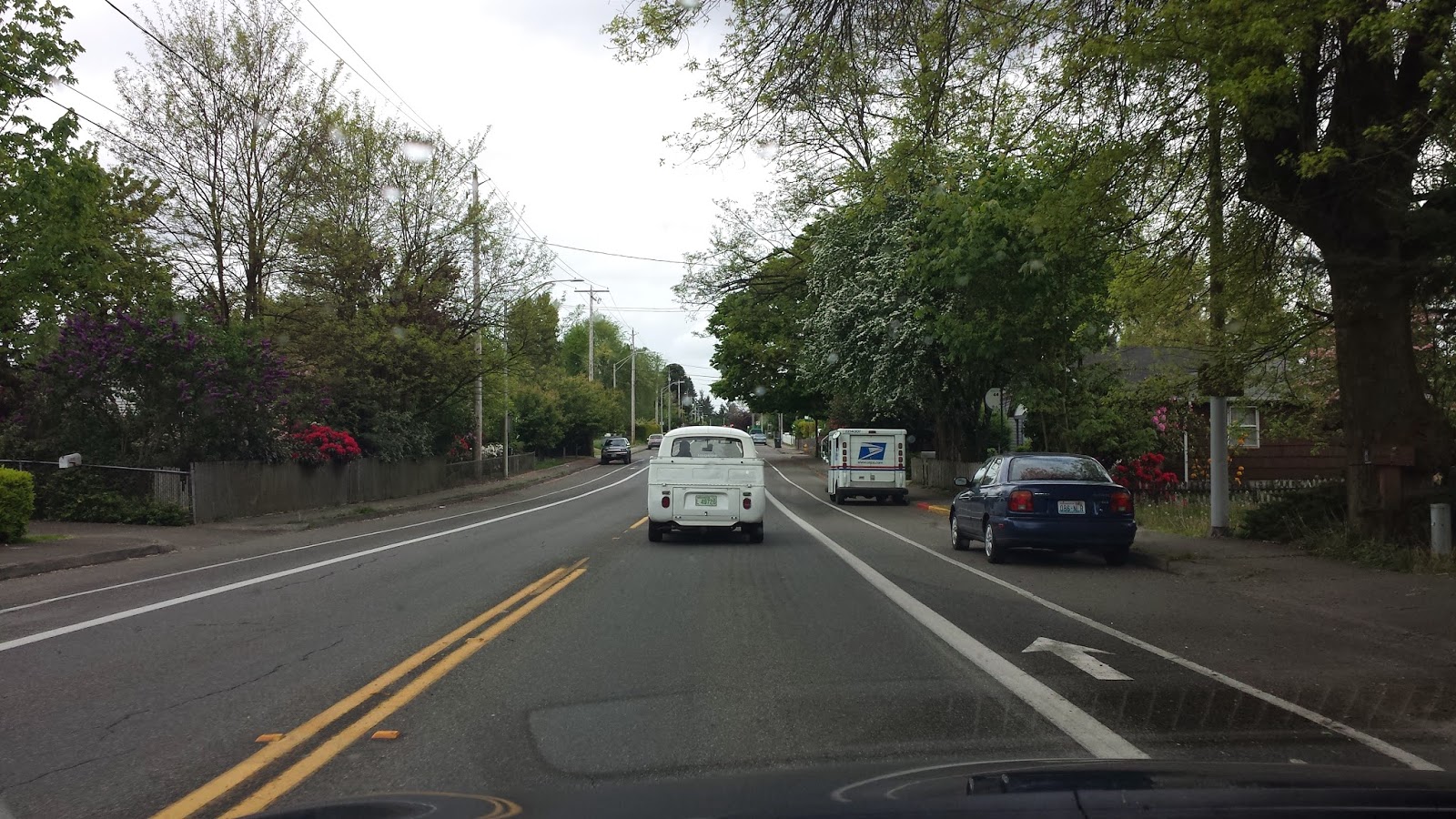 We had mentally and otherwise prepared ourselves for the stereotypical VW unreliability to rear its ugly head on the trip, so we had prepared a list of uHaul places along the way and purchased a set of tools upon arriving in Olympia.
About a mile into our journey Pedro was already stuck.  We were parked in the car rental place and Jason couldn't find reverse to save his life.  While trying to find it the gear stick seemingly popped out of place.  My experienced car guy put his tail between his legs and called the seller for some help.  Five minutes and a spare gear shift later, they figured out that it had popped out of the canal it was sitting in below the floor of the car.  A quick dismantle and reassembly and we were good to go!  I optimistically figured it was just the juju we needed to complete the rest of the journey without a hitch.

We headed back up to Seattle, as that was the trail head of our real journey...I-90 here we come. We were planning on making a stop in downtown Seattle to check out Pike Place Market and Starbucks, but the torrential downpours deterred us.  Instead we enjoyed the wet view from the window.  And here is Seattle... 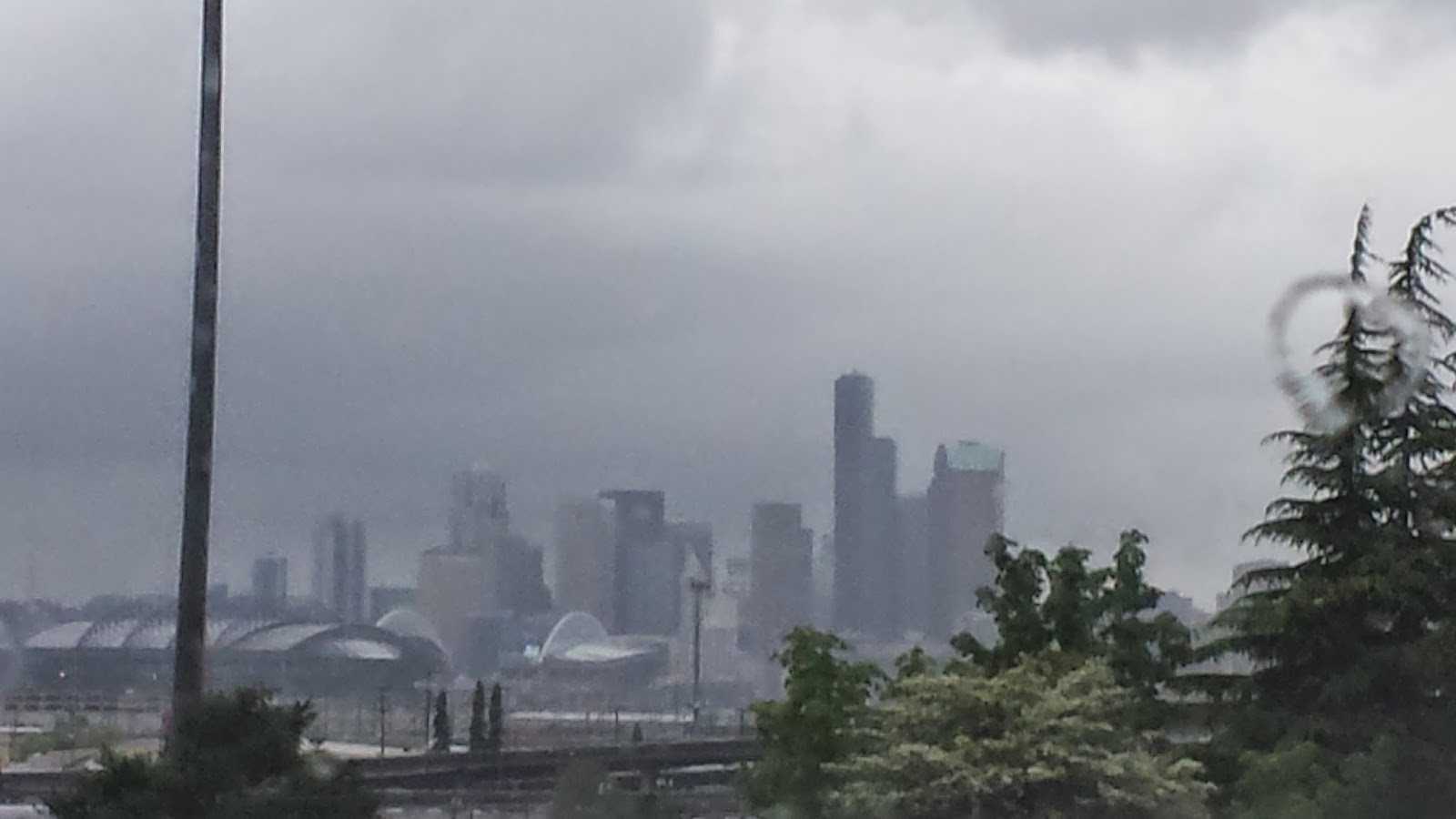 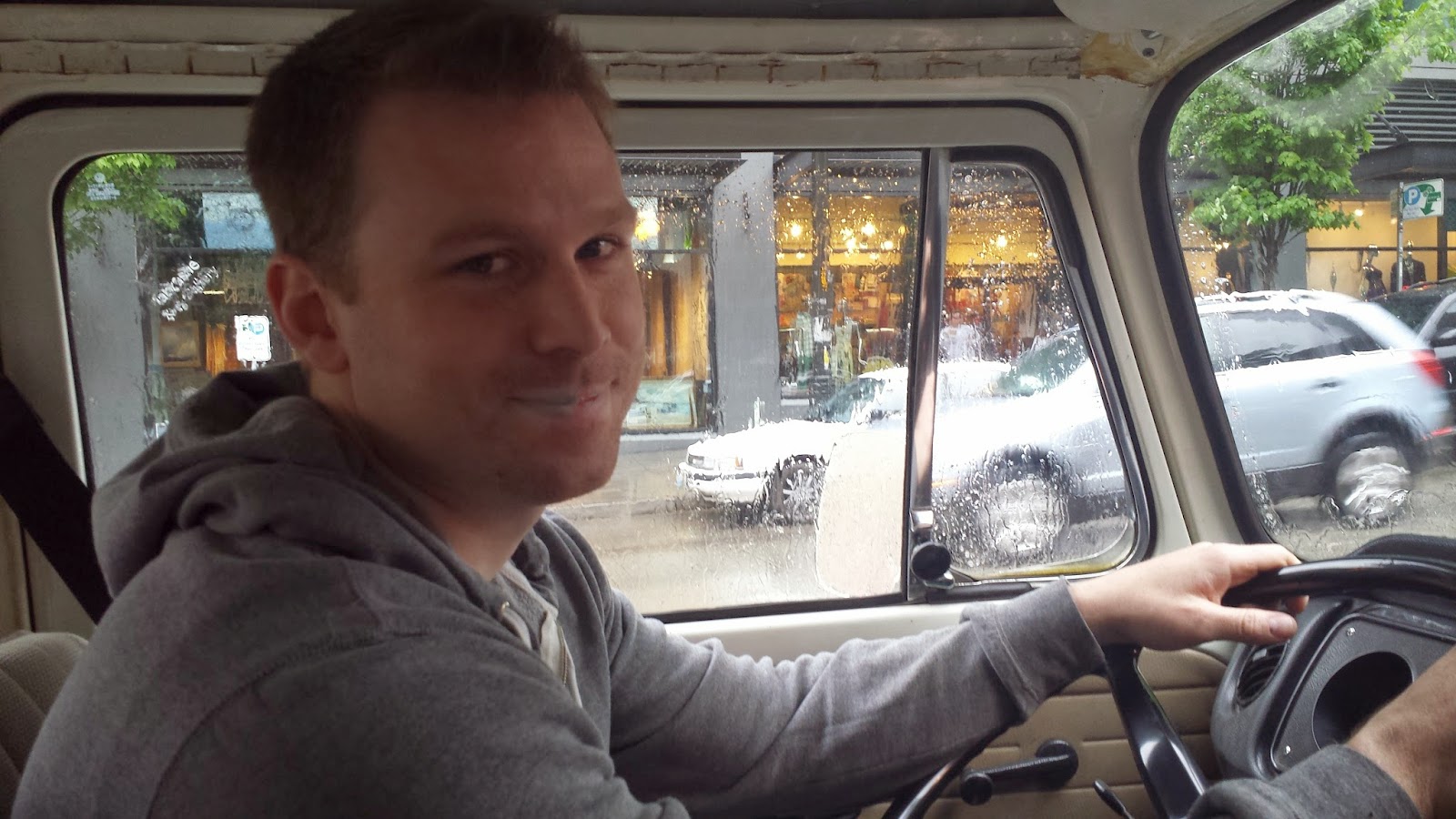 Past Seattle, but not far into the trip, we encountered the Snoqualmie Mountains, our first of many mountain passes to traverse.  We took a deep breath, flicked on the hazard lights and putt-putted up the mountain at 35mph. Ahh, life in the slow lane.  To our amazement he made it without a hitch so we treated him with a fill-up on the other side.  Maybe we should have been having higher expectations for this little guy all along? 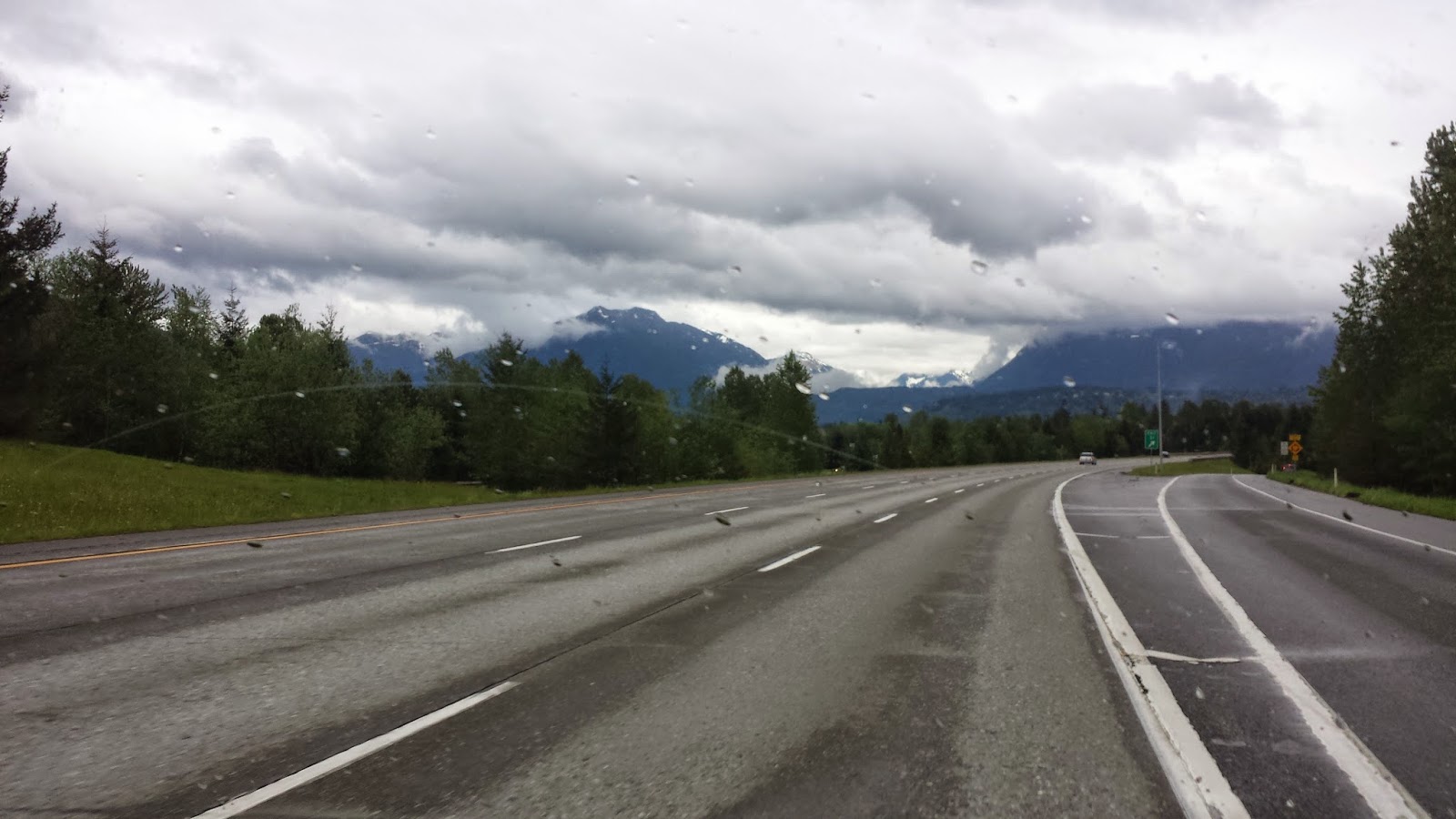 On a side note, we were graciously gifted by the seller with a gps to act as our effective speedometer since the smaller front tires don't allow the dashboard speed-o to calibrate correctly.  If you can make it out below normal highway speed for this baby is clearly 90! 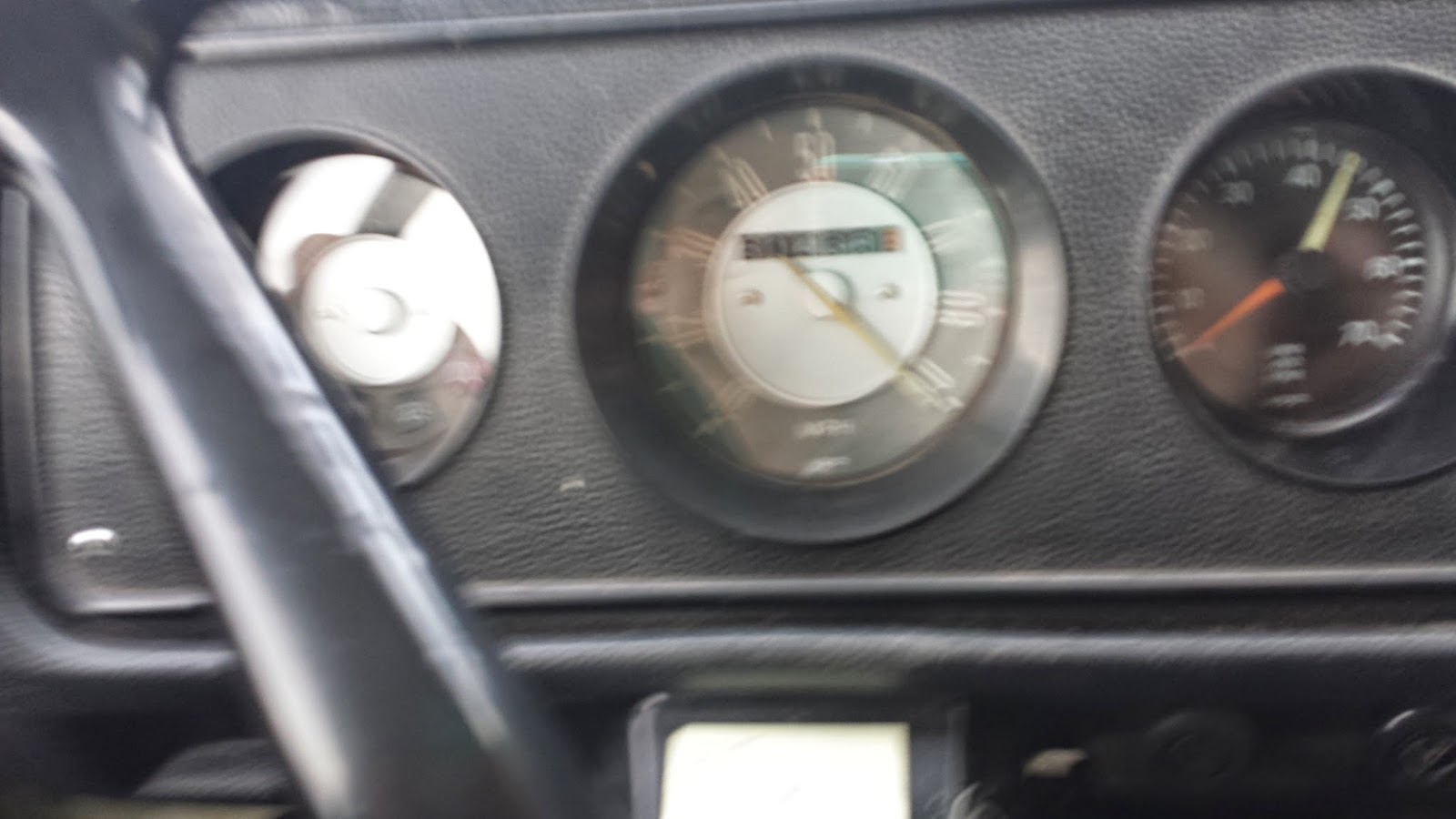 This happened to be a dual purpose trip for us...get Pedro home and see some interesting sights along the way.  We saw a sign for a petrified forest that was close to the highway so we satiated our wanderlust and pulled off.  We were greeted by the creepiest of creepy towns and were even welcomed by this gem of a sign.  'We've been expecting you...' 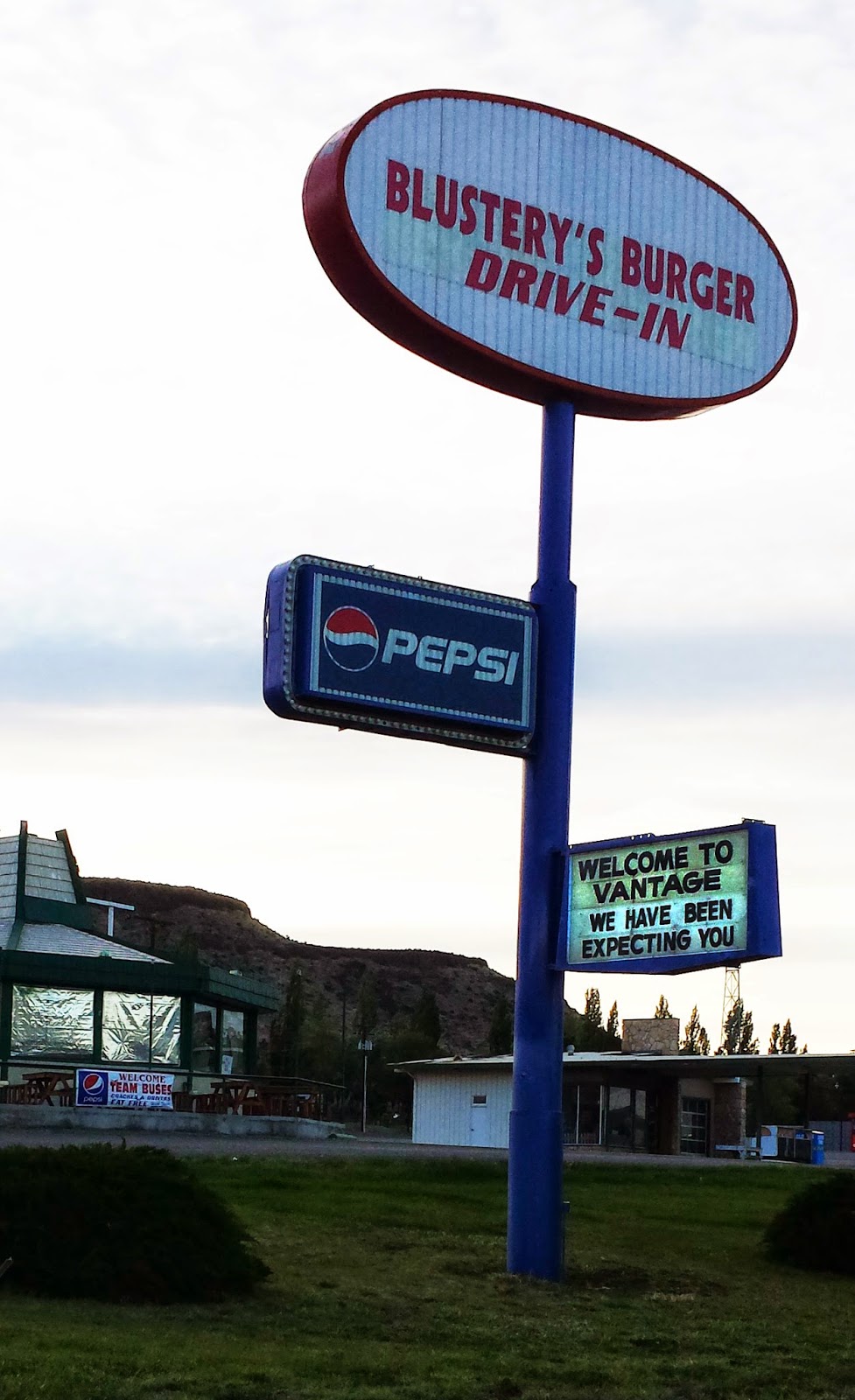 We cautiously continued on down the road past a few trailers and front yards that resembled junk yards to find Ginko State Park.  Now, the surroundings were pretty crazy but the petrified wood that had been pulled out of lava flows plus the gorgeous view of the Columbia River definitely made the stop worth it.  It may have not quiet been a forest as the sign promised, but hey, maybe someone thinks some chunks of rock/wood spread out on the ground qualifies! 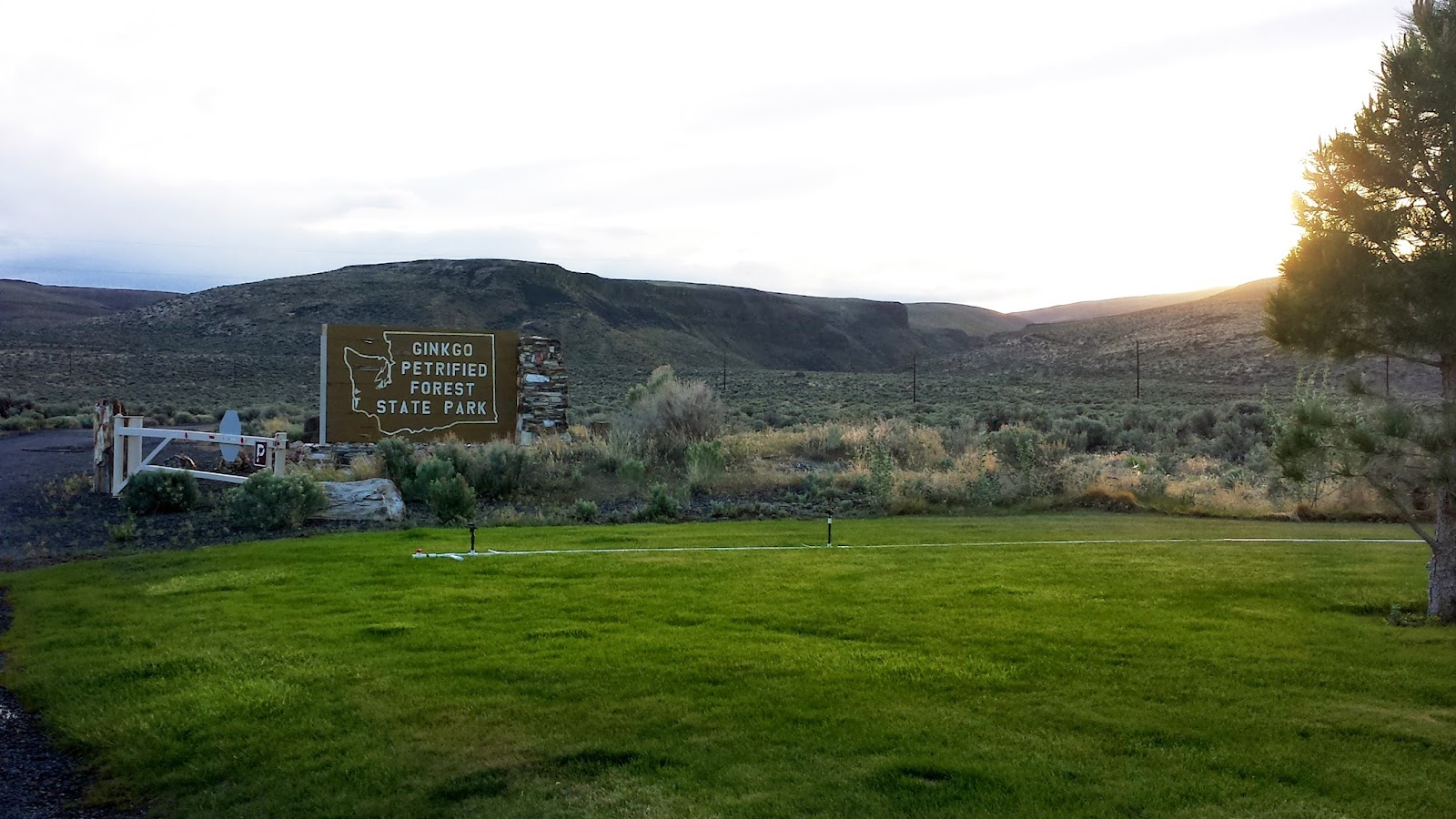 Plus, there were dinosaurs.  How could we not have been pleased we pulled off... 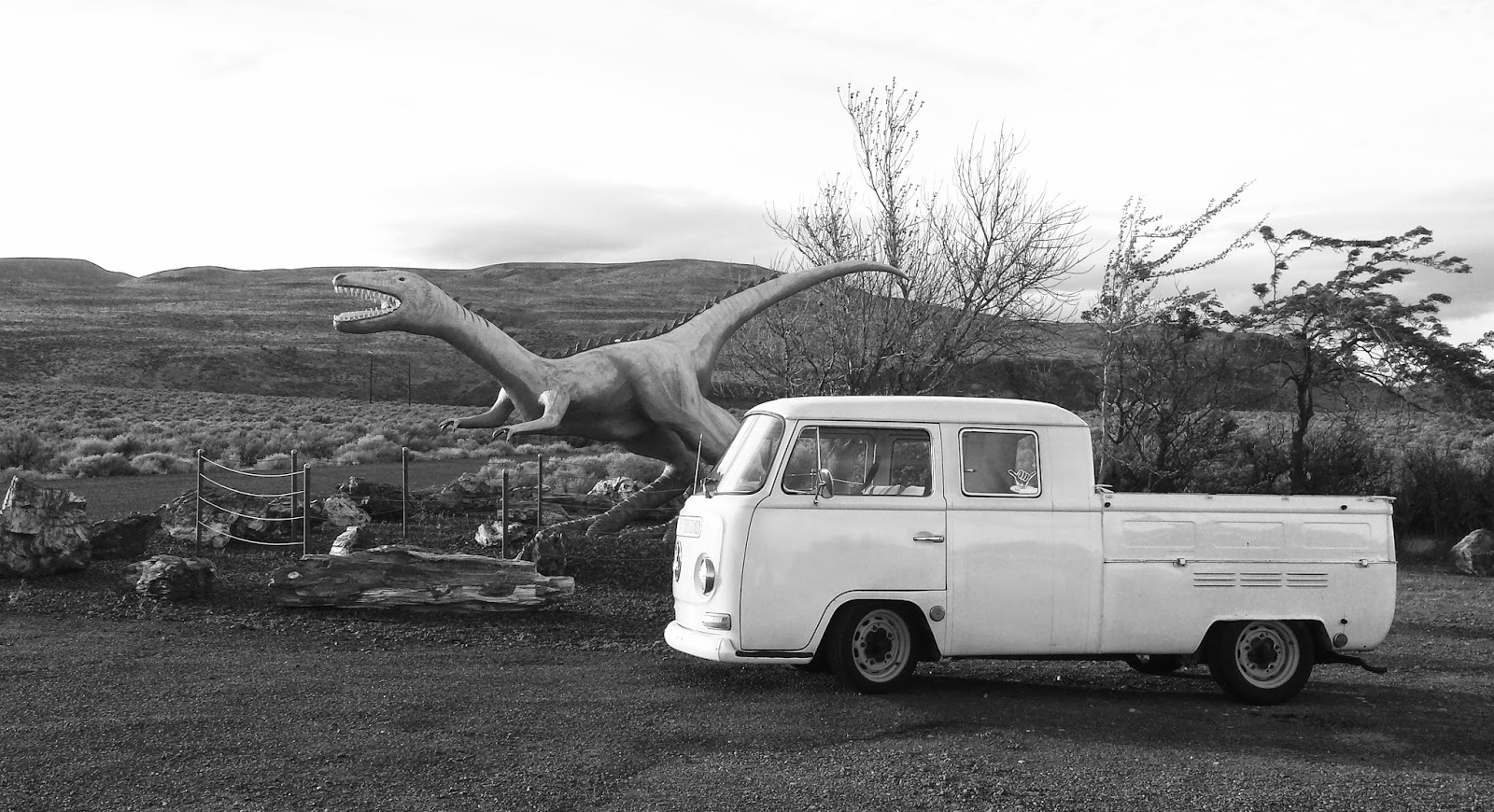 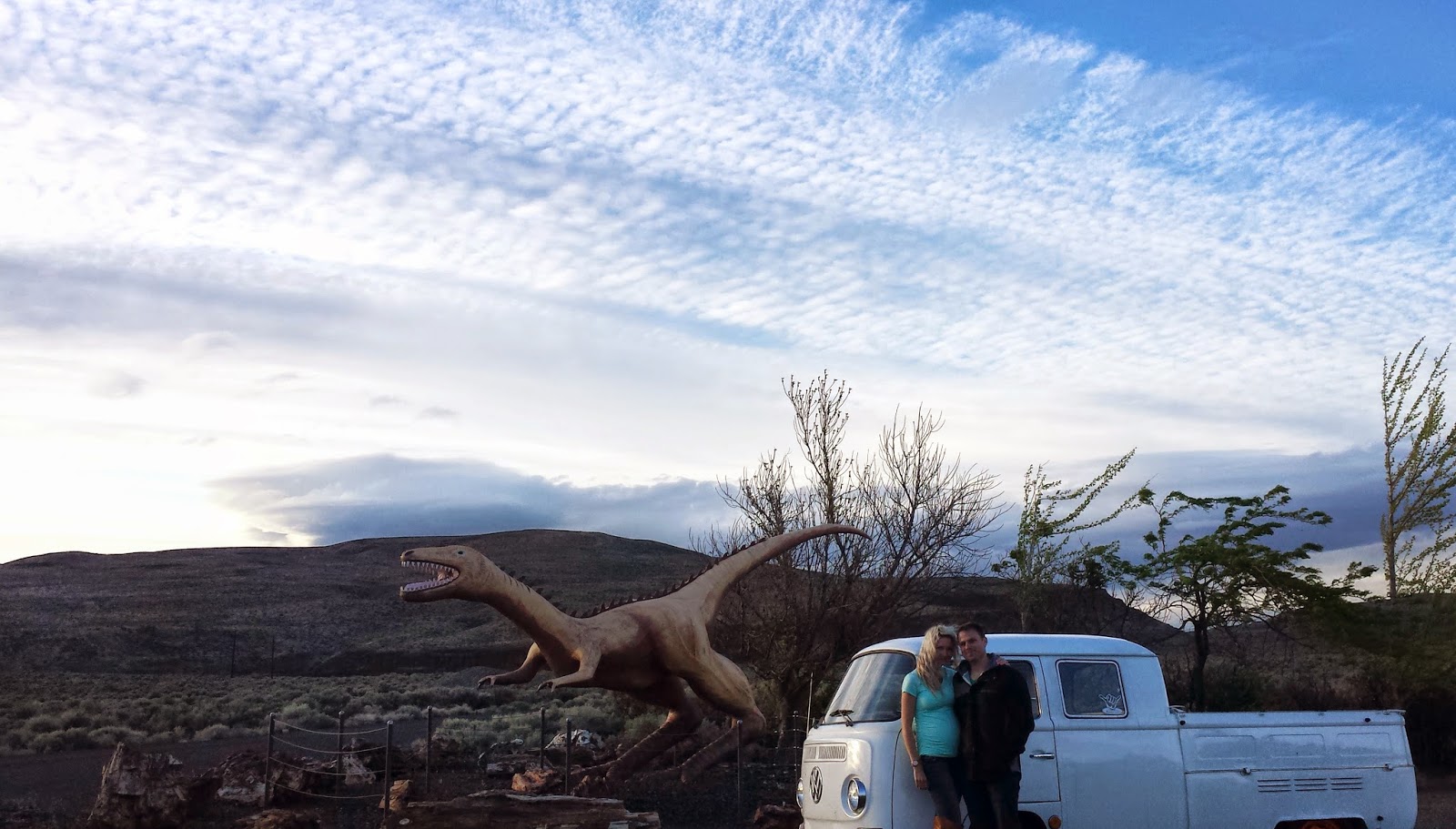 One random spot down and we were back on the road.  And yes, the road was still I-90 as it would be for most of the trip, but driver beware...eastern Washington is flat, flat, flat and the road is oh so straight.  We contemplated just letting the wheel go and setting Pedro to auto-pilot.  The farmers around that neck of the woods are very considerate though, with our lack of radio and terrain I was very entertained by all of the signs on the highway fence illustrating what crop was growing next to us.  Jason might have been getting a bit annoyed at hearing, 'Alfalfa....Sweet Corn....Potatoes' for three hours.  Personally, I thought it was better then silence!
We pulled off in the rinky-dink town of Ritzville, WA for the night, got dinner as the sole 10pm patrons of Jake's for Steaks Diner and called it a night. 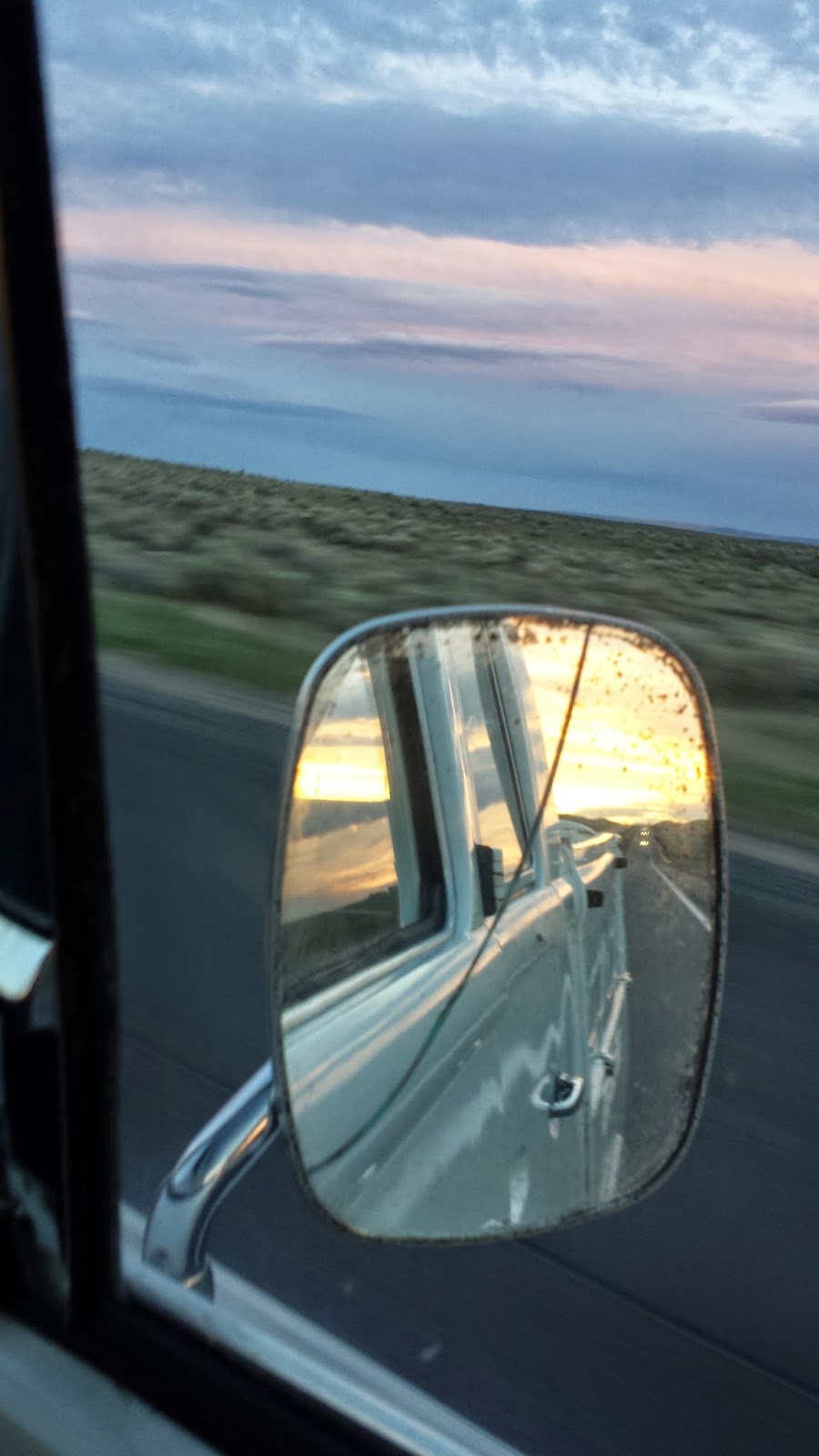 Stay tuned for Day Two of our travels in the next post....will we make it home?  Perhaps I'm writing this from the side of the road while Jason wields a cardboard sign that reads, "Stranded in Amazing Truck, Help!"
Probably not, but don't turn that dial!
Share Tweet Pin