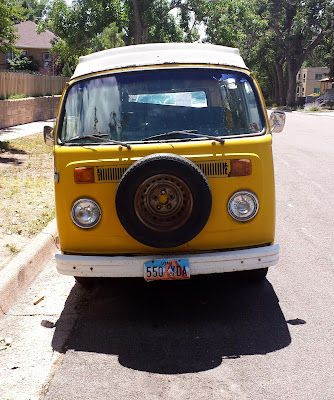 Bidding is so easy, really just the click of the mouse. Such a big commitment in one tiny finger motion.  I clicked and then picked up the phone, "Jason, I bid on a bus."

We had been talking about investing in a fixer-upper VW Westfalia Campmobile for a few months, but hadn't found the right one.  How could anything be more right then an email from eBay in my inbox stating that one of our watched items had been re-listed.  Sold.  Apparently we were Salt Lake City bound and one more vehicle heavy - the total now being 4, in addition to the 2010 Tundra, 2007 Mini and 1968 Mustang. 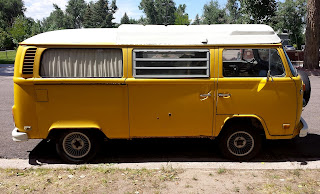 The 6.5 hour drive was long, but made a little shorter when we reached Utah and actually had some scenery to take in. (Western Wyoming isn't the most attractive road trip route, in case you were thinking of taking a drive.) Mid-afternoon we reached an unmarked store front which matched the address on the PayPal invoice. (Strange?)  We were let in and discovered that it was a buzzing office attached to a warehouse which appeared to house tons of items for sale on eBay and similar sites. 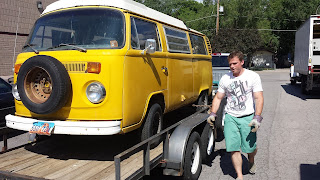 Five guys pushing, two wooden boards and 30 mins later our new-to-us bus was loaded onto the trailer. It begrudgingly started up which was a good sign, although it sounded like the engine had definitely seen better days.  I kept pointing out it's potential to Jason, secretly hoping that he wasn't hating me for my semi-impulsive bidding.   Come to find out, 10 minutes later, he wasn't hating me for my bidding, but he was hating my choice of a hotel smack in the center of downtown Salt Lake City.  After we de-stressed a bit from towing our new "toaster on wheels" through the unfamiliar city blocks (more him then me since I was just the backseat driver) we settled in for the night and tried to forget that we had to pull this thing out of the deep valley that is Salt Lake the following day.  After 2 hours of searching we finally found a restaurant that had a bottle of wine to serve us after our long day. (We're not Mormon, give us some booze!) 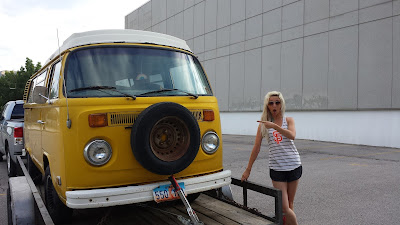 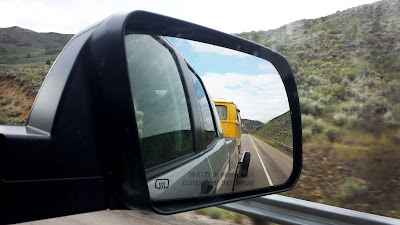 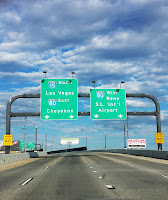 The next day after 8 hours of scenery-less driving back through Where's the Next Town Wyoming we found ourselves home safe, plus one relatively unattractive vehicle (it has potential!) and hoping that the neighbors were going to have mercy on our new project that has to be parked outside the house.


What did we get ourselves into?  Hopefully by next summer the potential I saw on eBay will be realized in the form of a beautifully restored white and grey 1973 VW Westfalia Campmobile with a kick-ass HGTV'd interior.  Wish us luck!
Share Tweet Pin